You asked: Why Blue Cave is sometimes closed?

Every time the famous Blue Cave on Vis island – Croatia is closed, we are repeatedly getting the same question from the customers: “Why the Blue Cave is closed?“. Even after 10 years of its popularisation, most of the people are not familiar with a fact that this is only and because of the weather and winds of Adriatic. It has nothing to do with rain showers or if is sunny or not – it can be the most beautiful day, for example in Split, Dubrovnik, Hvar, etc, but the cave could still be closed. So, we decided to explain and show you with photos and videos why it is like that.

Now we know WHY the cave gets closed, so let’s explain WHY we can not always predict WHEN will it be closed. The entrance is very narrow and it is on the south side of the island – hence it’s sensitive to the south winds, causing swells and tides that block the entrance. It doesn’t matter if it’s RAINY or SUNNY, and there’s no obvious rule of thumb regarding wind force.

Blue Cave – when is open

On this photo you can see how the entrance to the Blue Cave looks like on calm sea. As you can see, the entrance is very narrow, and you have to bend your head while entering inside with a boat. Can you now imagine how it is like when waves are hitting the top of the cave? Well, keep reading and watch the videos. 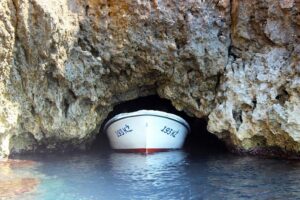 Blue Cave – when is closed

When Blue Cave is closed, it is mostly because of the south wind. Blue Cave is located on the south side of the Bisevo island (near Vis island), and south wind is causing the problems most of the time. It can be as well caused by other wids, but is mostly south wind, or “jugo” as we call it. Now check this 2 videos how it really looks like at the entrance.

It doesn’t matter how far ahead or last minute you have booked your Blue Cave tour in Croatia, when mother nature decides to take a break, the cave will be closed. Usually it is for 2 days in a row and it is happening aproximatelly 10% or 15% of the time during the whole season (from April 1st to October 31st, when Blue Cave is operating).

Also, no need for you to be checking weather forecast, your tour operator will do that for you and inform you if it is open or not. Unfortunately, in many cases when weather conditions are inconclusive, we can be sure only arround 8am on the day of the tour if the cave will be open or not, becauste then we get information from first hand – the Bisevo island port authority.