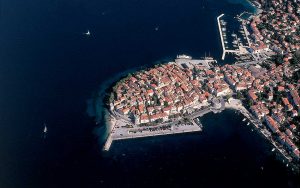 Main settlements on the island are city of Korčula and towns Vela Luka and Blato. Villages along the coast are Brna, Lumbarda, Račišće, and Prižba; Žrnovo, Pupnat, Smokvica and Čara are located inland. The island is divided into municipalities of Korčula, Smokvica, Blato and Lumbarda. The climate is Mediterranean; an average air temperature in January is 9.8 °C (49.6 °F) and in July 26.9 °C (80.4 °F); the average annual rainfall is 1,100 mm (43.3 in). The island is largely covered with Mediterranean flora including extensive pine forests. 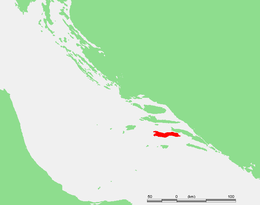 Korčula is a historic fortified city on the protected east coast of the island of Korčula. The old city is surrounded by walls, and the streets are arranged in a herringbone pattern allowing free circulation of air but protecting against strong winds. The town’s historic sites include the central Gothic and Renaissance Cathedral of St Mark, the Town Hall and the massive city fortifications. The 15th-century Franciscan monastery with a beautiful cloister is situated on the islet of Badija, near Korčula Town.

The sixth largest island in Croatia, Korcula is 20 miles long and rather narrow, between 4 and 5 miles wide on average. This island is known for its dense forest and the ancient Greeks called the island Black Korcula (Kerkyra melaina) for this reason.

The Cathedral of St. Mark

It was built by local masters from the fifteenth century to the mid-sixteenth century. It is at the forefront of the city, at the top of the peninsula. In 1557, an organ was placed in the cathedral. Jacopo Tintoretto painted the altarpiece of the cathedral of Korcula. The portal is the work of master Bonino from Milan. A new organ was built in 1787 by Vinko Klisevic. In modern times the cathedral was decorated with a bronze statue of Jesus Christ, the work of Croatian sculptor Frane Krsinica. 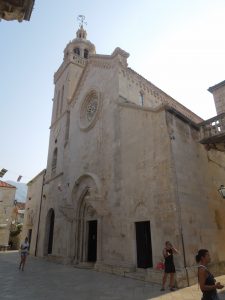 Transport on the Korčula island

Korcula nearest airports are Dubrovnik Airport and Split Airport both convenient to reach the island. Croatia Airlines is the state owned flight-carrier but there are various low cost and charter flight companies that do flights to Croatia.
Car ferries connecting the island with Split, Dubrovnik, Brač and Hvar. Here you can buy tickets: www.jadrolinija.hr. You can also take a bus from Dubrovnik.

There are seven hotels in Korcula. If you choice for the accommodation is hotel it is hard to make the decision but I would recommend Hotel Park, as good value for money hotel or the old-fashioned Hotel Korcula De La Ville. This hotel is situated on the waterfront – Riva , right on the edge of the Korcula Old Town. The sea views and sunsets from its large, convivial terrace compensate for the smallish bedrooms. This is the best place to have your early morning coffee or afternoon tea. Locals are using its terrace for their easy-going early morning or late afternoon cafe-society sessions. As this hotel gets easily oversubscribed, good alternative for Korcula Old Town accommodation is Marco Polo apartments that are located in the very centre of the Old Town.
There are also several hostels and B&Bs on the island.